By Staff WriterWednesday 30 October 2019No Comments The value of Australian wine exports has continued to grow in the 12 months to September 2019, increasing by seven percent in value to $2.89 billion.

This period saw the average value of bottled exports reach a record $6.79 per litre and further growth in exports, particularly above $10 per litre free on board (FOB) to the United States of America.

Other positive milestones included the value of exports over $10 per litre FOB reaching the $1 billion mark for the first time, continued growth in exports to China and encouraging growth in exports to the Netherlands, United Arab Emirates, Denmark, South Korea and Belgium.

Export volumes decreased eight percent to 774 million litres (86 million 9-litre case equivalents); the climb in export value and the decline in volume meant the average value increased 16 percent to $3.74 per litre, the highest level since 2008.

Wine Australia CEO Andreas Clark said the growth in value reflected a “strong underlying story” with growth in all price segments above $5 per litre, with wine shipped at an average value of $10 per litre and above reaching record levels for both value and volume.

Mr Clark said while the value of unpackaged wine exported declined slightly, by three percent to $512 million, the volume had decreased 10 percent, which meant that the average value increased by nine percent to $1.22 per litre FOB, the highest level since early 2009.

“The positive numbers also reflect that the average value of bottled wine to all but three of our top 20 destinations are in growth and nearly all the major global regions imported more Australian wine in the past year, with the exception of Europe, which declined by three percent,” he said.

“Australian wine exports to China (including Hong Kong and Macau) reached a record value of $1.25 billion, an increase of 18 percent, with average value increasing by 40 percent to $8.42 per litre FOB,” Mr Clark said.

While the International Monetary Fund had reduced its forecast growth rate for China’s economy to 6.1 percent in 2019, the potential softening of consumer demand was offset by Australia’s continued strong performance in the market.

“Global Trade Atlas figures for the year ended August 2019 showed that overall wine imports declined by 11 percent in value [AUD], with French wine being the biggest contributor to the decline. Australia’s long-term growth trend, coupled with France’s sudden decline, has led to Australia becoming the number one source for wine by value in China’s imported market for the first time.” 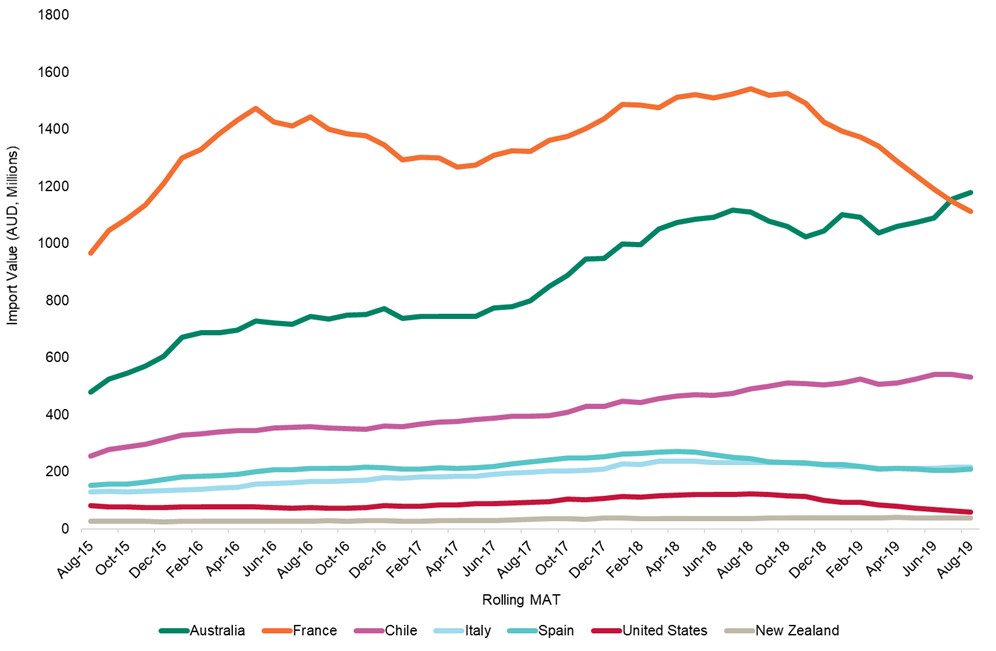 “Exports to the USA increased by three percent to $A436 million during the year ended September 2019. Volume declined by nine percent to 146 million litres, contributing to a 13 percent increase in average value to $2.97 per litre FOB,” Mr Clark said.

Mr Clark said the Australian wine sector was putting a lot of effort into improving its performance in the USA.

“September and October marked the largest-ever promotion of Australian wine in the USA,” he said.

“The recently executed Far From Ordinary campaign included more than 100 wine exhibitors, three nights of consumer events and a six-city roadshow of trade tastings, in a marketing strategy designed to lift the perception and demand for Australian wine among American trade, consumers and media.

“As its name suggests, there was nothing typical about the Far From Ordinary campaign. Its non-traditional marketing approach was designed to spark intrigue, get people’s attention and cut through in the competitive USA market. We’ve been pleased by the positive publicity generated by the the campaign, which was partially funded by the Australian Government’s $50 million Export and Regional Wine Support package.”

Exports to the United Kingdom declined by four percent in value to $365 million and two2 percent in volume to 233 million litres (26 million 9-litre case equivalents).

The economy in the UK remains soft as a result of uncertainty around Brexit but Australia remains number one in the UK off-trade market as it has been for 20 years, with sales growing by 0.2 percent in value to £1.2 billion in the year ended June 2019 (IRI Worldwide).

The declines in Australia’s overall export volumes are related to a number of factors including: