By Staff WriterWednesday 28 October 2020No Comments Steady demand for Australian wine around the world has seen growth in value to all top-five export markets and a four percent increase in overall value to $2.998 billion, according to Wine Australia’s latest Export Report.

In the 12 months ended September 2020, the average value of Australian wine exports increased by four percent to $3.89 per litre, matching the growth of overall value. The volume of exports declined slightly by 0.4 percent to 771 million litres (85.7 million cases).

Wine Australia CEO Andreas Clark says the overall value is at the highest level since exports reached $3 billion in the second half of calendar year 2007.

“Despite the unprecedented disruption that we’ve seen in markets around the world, Australian wine export volume has held reasonably steady and it is particularly pleasing to see both the overall value and the average value of exports growing during these challenging times,” Mr Clark says.

For the 12 months to the end of September 2020, the growth in value was predominantly driven by exports to the United Kingdom (UK) and mainland China. And that growth has been particularly strong in the last quarter of the 12-month period.

“During the July to September 2020 quarter, the value of exports increased by 23 percent compared to the same period in 2019, and this comes after declines of four percent in the April to June quarter and seven percent in the January to March quarter,” Mr Clark says.

Figure 1: Value of exports by quarter (A$ million FOB). 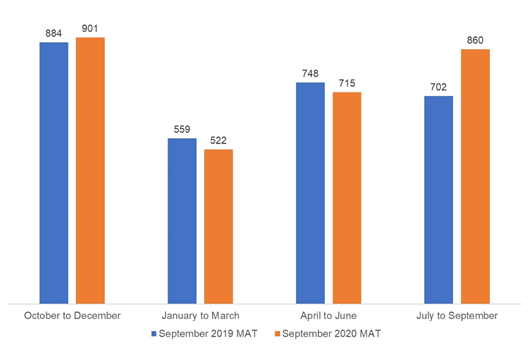 “Throughout the Covid-19 pandemic, there have been clear trends for wine consumption emerging around the world. While premiumisation has continued, there has also been a resurgence in commercial wines, and this is evident in the growth that we’ve seen in different price segments, where it was particularly strong at the low and high ends.

“Different markets have had different trends. In markets such as the UK and United States of America (USA), growth was primarily at the commercial/value end, while in China growth for premium wines has remained strong this year.”

Exports in glass bottles increased by two percent in value to $2.4 billion and decreased by three percent in volume to 336 million litres (37 million 9-litre case equivalents). This translated to five percent increase in the average value of bottled exports to an equal record $7.14 per litre, due to an increase in exports at the high end of the price spectrum.

Unpackaged wine exports increased by 13 percent in value to $576 million and two percent in volume to 427 million litres (47 million 9-litre case equivalents). The average value of unpackaged exports has remained high, increasing by 10 percent to $1.35 per litre – levels not seen since late 2004 – due to the relative short supply of Australian wine in an already constrained global supply situation.

The most significant growth came in exports to Europe, up 16 percent to $678 million and overtaking North America in value terms for the first time since 2011.

The top five destinations by value all recorded growth. They were:

Exports to mainland China increased by four percent in value to $1.17 billion and decreased by 12 percent in volume to 123 million litres (13.7 million 9-litre case equivalents). Average value increased by 18 percent to $9.54 per litre FOB. Higher-priced exports recorded exceptional growth, especially at $30 or more per litre. Almost two-thirds of Australia’s exports to mainland China are priced at $10 or more per litre.

In the 12 months ended September 2020, exports to the UK increased by 18 percent in value to $430 million and 10 percent in volume to 256 million litres (28.4 million 9-litre case equivalents). The value of exports to the UK is at the highest level since 2011. It is understood that some companies are shipping products to market ahead of the impending Brexit deadline of 1 January 2021 to minimise any potential disruption.

The growth of exports is coming predominantly at below $5 per litre, which is primarily shipped as unpackaged wine. Eighty-five percent of Australia’s exports to the UK are shipped as unpackaged wine before being bottled in-market. Furthermore, currently some Australian wine that is packaged in the UK is then re-shipped to other markets in Europe.

Photo by Ben Allan on Unsplash